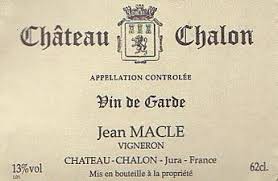 Although Château-Chalon is not well known within the broader wine community, and very little is imported into Australia, the area has been showered with accolades since Roman times.

Curnonsky, the famous 20th century Parisian “Prince of Gastronomes” included the wines of Château-Chalon among “the five great white wines of France,” along with Montrachet and Yquem. He postulated that you did not understand the white wines of France until you had tasted great Vin Jaune.

The liquid treasures of Domaine Macle are hard to come by. Even in France they are quite rare and the Domaine has not historically exported from Europe. The Château Chalons have all the power of great Vin Jaunes, but the extra finesse, elegance and staying power that this little Grand Cru of Jura gives.

Some wines from this producer are sold on allocation, please get in touch if you’re interested in getting an allocation.

“The charm of the Jura and its wines come from the sense that time has grown genuinely mossy and amnesiac here. Small vineyards, old vines, curious grape varieties seen and tasted nowhere else, vinification methods that would be regarded as obtuse or mad by the oenological conformists who pass judgment at international wine shows. If you are one of those people who long to escape from the shallowness and tedium of wine fashion, then the Jura is for you.” – Andrew Jefford, The New France.

“Jean Macle is known by many as the true master of Château-Chalon and his son, Laurent is succeeding well in living up to his reputation. The Château-Chalon is amazing, year in, year out…” – Wink Lorch, winetravelmedia.com